What could only be described as an exciting few days with the first win for our ponies was with Kathleen Scotts Cadlanvalley Sandpiper produced and ridden by Katy Marriott Payne he is the NPS Baileys Horse Feeds Mountain and Moorland Ridden Welsh B of the Year. No stranger to HOYS as he has qualified every year since four years old and has won it before in 2015. Then on another day it was a win in The Spencer Family Lead Rein Pony of Hunter Type of the Year Championship for Cadlanvalley Super Ted owned by Lisa Kerr ridden by Ness Kerr and produced by Graig Eleanor.This was his second win at Hoys as two years previously he won with Cate Kerr a sister to Ness. To give both sisters a win was amazing.Then our third win was in the PUK Junior M&M Ridden Small Breed Pony of the Year with Cadlanvalley Mikado and our grandaughter Libby Grota and they were also Reserve Champion .So thrilling to see a pony win at Hoys home bred and ridden by youre grandaughter is everyones dream.Our advert for the 2018 Welsh Pony and Cob Society Journal sums up HOYS 2017. 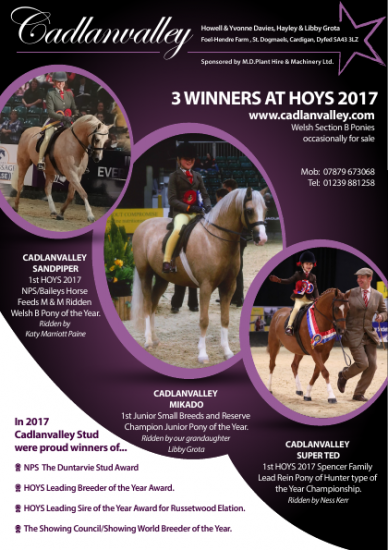